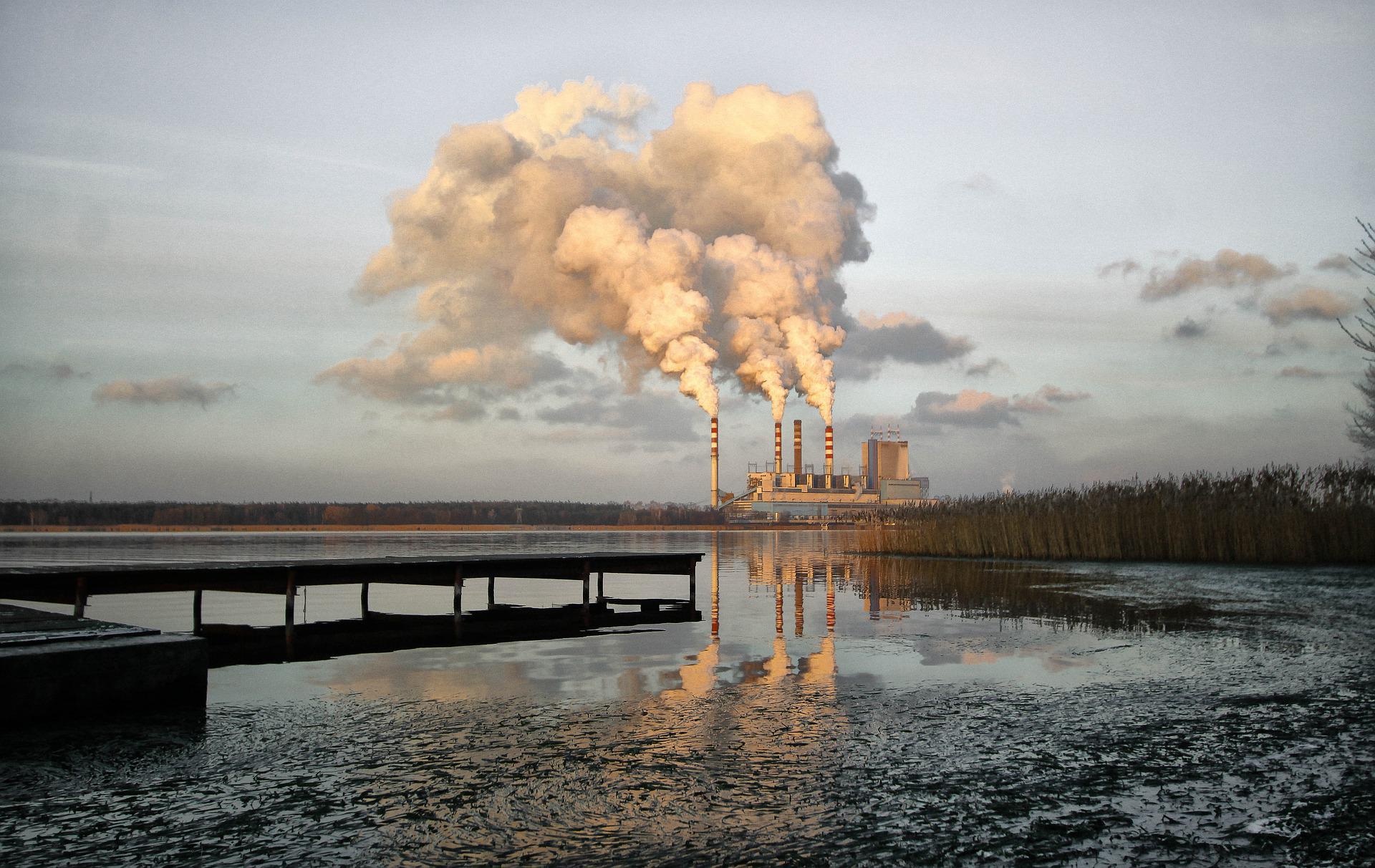 Carbon Capture and Storage (CCS) has become top of mind in oil and gas, energy policy, and sustainability conversations worldwide. But few, apart from the geologists and engineers who work directly in CCS, understand what it is.

This article will be the final of our series on “What Is CSS” and will serve as an introduction to the economics of CSS so that it can be understood by everyone.

CCS is a broad term that represents several technologies which capture carbon dioxide (CO2) emissions from facilities or directly from the atmosphere. The process is designed to help prevent the accumulation of greenhouse gases in the atmosphere to reduce global warming. Once captured, the CO2 is re-used as a gas in manufacturing processes or is stored via enhanced oil recovery.

There is growing interest in the economics and developing markets of CSS in Canada and around the world.

What is Carbon Pricing?

Carbon pricing is a method used to determine the costs of greenhouse gas (GHG) emissions. Setting a price on carbon helps shift the burden of impact caused by GHG emissions back to those who are responsible for the emissions. This allows the emitters to decide to either transform their activities and lower their pollution output or continue emitting and pay a form of tax on those pollutants. Carbon pricing is, at its core, about recognizing the cost of pollution and accounting for those costs in daily decisions. Putting a price on CO2 is widely recognized as the most efficient means to reduce greenhouse gas emissions while also driving innovation in the energy industry.

For governments, carbon pricing is seen as a source of revenue. Businesses use carbon pricing for the internal economic evaluation and the impact of mandatory carbon prices on their operations and revenue opportunities. Current carbon price for 2022 in Alberta is roughly $50CAD per tonne (1000kg) of CO2 equivalent greenhouse gas emissions. It remains to be seen if the price of carbon prescribed by the Greenhouse Gas Pollution Pricing Act (GGPPA) will increase to C$170 per tonne of CO2 equivalent emissions by 2030 as described in the federal government’s proposed climate plan entitled A Healthy Environment and a Healthy Economy.

Carbon Pricing and the government

Since 2019, every jurisdiction in Canada has had a price on carbon pollution. Canada’s approach is flexible: any province or territory can design its own pricing system tailored to local needs or can choose the federal pricing system. The federal government sets minimum national stringency standards that all systems must meet to ensure they are comparable and contribute their fair share to reducing greenhouse gas emissions. If a province decides not to price pollution or proposes a system that does not meet these standards, the federal system is put in place. This ensures consistency and fairness for all Canadians.

Under the Greenhouse Gas Pollution Pricing Act (GGPPA), adopted on June 21, 2018, the federal pricing system has two parts: a regulatory charge on fossil fuels like gasoline and natural gas, known as the fuel charge, and a performance-based system for industries, known as the Output-Based Pricing System. The fuel charge applies in Ontario, Manitoba, Yukon, Alberta, Saskatchewan and Nunavut. The Output-Based Pricing System applies in Ontario, Manitoba, New Brunswick , Prince Edward Island, Yukon, Nunavut, and partially in Saskatchewan. All other provinces and territories are implementing their own pricing systems. You can learn more about the Canadian carbon pricing system here.

Pricing carbon pollution is working in Canada. It is encouraging industries to become more efficient and use cleaner technologies, and it is spurring new and innovative approaches for cutting pollution, using energy differently, and saving money. Ultimately, by setting up a market for pollution, it is possible to find a market efficient rate for emissions.

Three Steps for Carbon Capture and Storage Process are:

The separation and capture of CO2 from other gases produced at large industrial process facilities. There are several CO2 capture technologies commonly used in natural gas sweetening and ammonia production used on a commercial scale. Gaps in current knowledge are related to steel and cement production, and differences of component technologies for the capture systems.

Compressed and transported CO2 via pipelines delivered to storage destination. Design will include following: Mechanical design, Protection against corrosion, Trenching and backfilling.

The costs of pipelines are divided into three items:

CO2 is injected into underground rock formations. Injecting CO2 into owned and existing reservoirs carries liability and mineral rights costs for the wells. New saline acquisitions would be run through a pore space application process which will determine initial cost of development if the area is not already owned.

The cost of transporting and storing carbon varies greatly based on the country in which the storage is taking place and the geological features of the storage area. The greatest variance in storage price comes from the volume of CO2, the transportation distance, and the structural integrity of the storage location itself.

It is also possible for the carbon capture, transport and storage costs to be negative if the returns from enhanced oil recovery, or EOR, are greater than the costs to store the CO2.

Large scale coal-fired plants are one of the largest contributors to carbon emissions in the industrial space. The cost of carbon capture can generally range anywhere from $120 USD/Tonne to $50 USD/Tonne. This depends on the age of the facility, associated costs of capturing emissions, and other factors specific to each emission site. 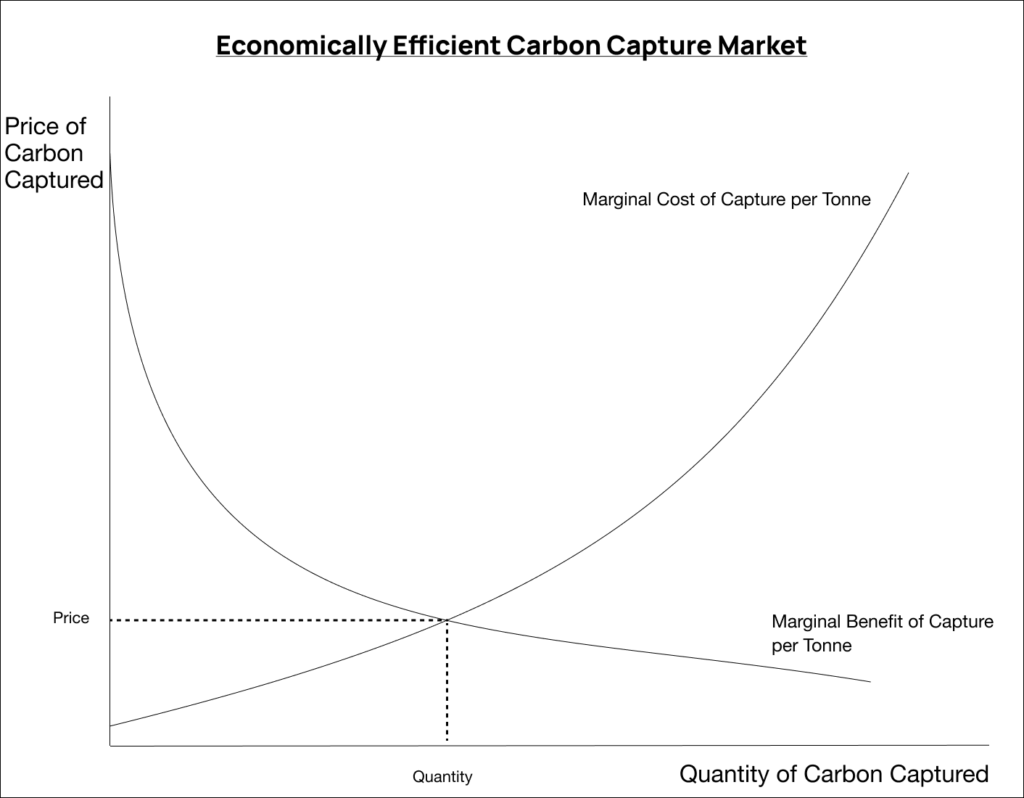 The economic efficiencies which carbon capture relies upon, requires that the overall costs of capture are equal to the benefits they provide. In this case the benefit is largely considered a public good. Following the law of diminishing returns, for every increase in the amount of carbon that is captured, the benefits grow at a smaller rate, and the cost increases. For instance, increasing carbon capture from 0%-10% of emissions would have great public benefit and be relatively inexpensive. Increasing carbon capture from 90%-100% would provide very little added benefit and would be incredibly costly.

By internalising public goods into a defined market between buyers and sellers, largely known as a carbon credit market, a discernable level of efficiency can be estimated. As the market develops and becomes more efficient, the cost to benefit ratio will improve and more carbon capture can occur for the same cost. Thereby increasing public benefit.

Public good is a developing area of economic research, particularly as it pertains to the energy sector. As the economic science of a carbon capture market improves, better levels of efficiency can be achieved.

Vista Projects is an integrated engineering services firm able to assist with your Carbon Capture projects. With offices in Calgary, Alberta, and Houston, Texas, we help clients with customized system integration and engineering consulting across all core disciplines.

Special thanks to the contributors of this article: