This post is for anyone who has ever wondered what is a cogeneration plant or how one works.

How Does a Cogeneration Plant Work?

When a power plant generates electricity, it produces heat. If the plant releases that heat into the environment as exhaust, it represents a huge waste of energy. Most of that heat can be captured and used for other purposes. When that repurposing of heat occurs, the power plant is working as a cogeneration system.

The cogeneration process can increase overall energy efficiency, with typical systems ranging from 65 to 90 percent. Businesses that use cogeneration can lower operational costs and boost their self-sufficiency while reducing greenhouse gas emissions and pollutants.

The Story Behind CHP

The concept of combined heat and power isn’t new. Europe and the U.S. both used forms of CHP as early as 1880 to 1890. During those years, many industries used their own coal-operated power plants to generate the electricity that powered their mills, factories, or mines.

The steam that was produced as a byproduct was used as thermal energy for various industrial processes or to heat the space.

Thomas Edison designed and built the first commercial power plant in the U.S. in 1882 and it just so happened to be a cogeneration plant. The thermal byproduct of Edison’s Pearl Street Station in New York was distributed as steam to local manufacturers and it also heated nearby buildings.

The Rise and Fall of CHP Use

In the early 1900s, CHP systems produced about 58 percent of the total on-site electrical power generated in industrial plants in the U.S. That percentage plummeted to only 5 percent by 1974, according to “Cogeneration: Technologies, Optimization, and Implementation“, edited by Christos A. Frangopoulos.

There were many reasons for that sharp decline.

However, when fuel costs skyrocketed in 1973 and awareness of the harmful effects of pollution grew, cogeneration became highly relevant again.

There are several benefits to using cogeneration. The main reasons to use CHP are to save energy and costs by reducing fuel consumption. For instance, in the U.K., existing users of CHP save 20 percent of their energy costs.

With CHP, when fuel energy is converted into mechanical or electrical energy, the bulk of the heat that’s released isn’t wasted. Less fuel is needed to generate the same amount of useful work that a conventional power plant would produce.

That reduced fuel use has several benefits, including:

Another benefit is security.

Cogeneration is considered a secure power supply since it provides stand-alone power that isn’t dependent on a municipal power grid. A business that uses cogeneration can operate off-grid or easily supplement to meet a surge in power demands.

Vista’s cogeneration engineering experience ranges from “micro” cogeneration designs that can generate between 5-10 MW of power to much larger cogeneration facilities.

What Is a Cogeneration Plant: The Basic Elements 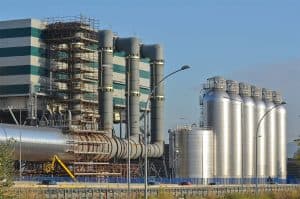 At the most basic level, a typical cogeneration plant has an electricity generator and a heat-recovery system.

Here are some basic elements of a CHP setup:

What Fuels Are Used in Cogeneration Plants?

A variety of fuels can be used in cogeneration plants, including:

The use of biofuels in cogeneration typically includes renewable resources, like waste gases from landfills and solid waste from agriculture.

Who Can Use Cogeneration?

Each scenario can benefit from a recycled energy system. A factory that requires more electricity than heat can sell the heat to a utility and excess electricity can similarly be sold.

When the right conditions apply, it makes sense to use cogeneration. It’s a reliable and efficient way to provide on-site power that’s beneficial economically and environmentally.